Godzilla is a Joke Compared to This Lizard.

“They’re the rats of the lizard world.” “They’re a menace.” “They are one of the biggest threats to Bahamian biodiversity.” What are they?

Green Iguanas. Not native to The Bahamas, the Green Iguana presents a growing and potentially devastating threat to the biodiversity of our country and the biggest threat to the critically endangered Bahamian Rock Iguana*.

Green Iguanas are native to Central America, parts of South America, and the eastern Caribbean. In these countries, they present no risks. Naturally existing predators control their populations, and the native environment of their homelands are rich in the food sources needed to sustain their large numbers.

But when you take these rapidly reproducing reptiles, out of the environment in which they naturally occur, the results are devastating. Unchecked, their populations explode, with the collateral damage being the infrastructure, agriculture, tourism, long-term food security, and biodiversity of the areas they’ve attacked. 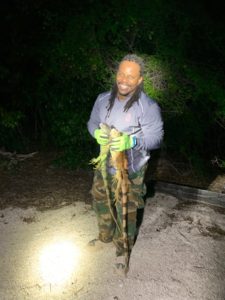 Large numbers of these lizards become a nuisance. They have caused cities millions of dollars in repairs. These lizards burrow underground to lay their eggs shorting out power lines, collapsing roads, and eroding coastlines. Green Iguanas strip the leaves off native and decorative plants and cause severe damage to farm crops.

Just ask the residents of the Cayman Islands how devastating these invasive animals can be. Small numbers of Green Iguanas first started appearing on the island’s landscape in 2004, but officials initially felt that they were no cause for alarm. In a short while, these lizards took a foothold. Fast forward to today, and the Cayman Islands has, through their invasive species management programs, removed more than 1.4 million iguanas from their country, and the lizard invasion shows no signs of slowing. The grim reality is that, so far, no country has been able to eradicate this species once a breeding population has become established.

But the most tragic casualty of a Green Iguana invasion will be the extinction of the Bahamian Rock Iguana. Native to the Bahamas, this one-of-a-kind iguana is among the most critically endangered lizards on earth.

The unavoidable crossbreeding that will take place if the Green Iguana gets a foothold in The Bahamas will result in our native lizard being bred entirely out of existence, having its unique genetic code overwritten by that of this green menace.

However, a few weeks ago, you helped the country take a crucial first step in the fight against this enemy. Because of the support you provided, members of the BNT’s parks and science teams received specialized training to help them fight the threat of the Green Iguana.

The training showed them how to assess the degree of impact that the Green Iguana is having on an area. It also taught the team how to track them. They learned the tell-tale signs that show Green Iguanas are in an area and finally how to capture and remove them.

The BNT team will use this training to develop and establish an invasive species management program for the Green Iguana. Putting this program in place is a critical step in our country’s winning the battle against the Green Iguana.

With the new training under their belt the team, then worked in communities on Andros to equip residents there to enter the fight. They put up posters, visited schools, and met with police and local officials to raise awareness about the Green Iguana issue. They also taught them how to spot Green Iguanas and what to do if they encounter them.

Andros is a key battleground in the fight against the Green Iguana because of its vast wilderness spaces. If Green Iguanas were to get a foothold in a wide-open environment like that, the results would be catastrophic.

Andros is also important because it has a unique species of Rock Iguana. The Andros Rock Iguana, unlike any other type of iguana, nests in termite mounds. No other iguana on the planet does that.

The training that you helped make possible is a critical first step in protecting the Bahamian Rock Iguana.

*Spiny-Tailed Iguanas, another type of non-native lizard, also present the same threat as the Green Iguana.

The Bahamas does not have a lot of time to get ahead of the threat from the Green Iguana. The window is quickly closing. If you would like to learn how you can help, email supporttheparks@bnt.bs.

If you want to jump right in and make a difference in the fight, please donate to help eradicate Green Iguanas from The Bahamas.

The Bahamas does not have a lot of time to get ahead of the threat from the Green Iguana. The window is quickly closing. If you would like to learn how you can help, email supporttheparks@bnt.bs.

If you want to jump right in and make a difference in the fight, please donate to help eradicate Green Iguanas from The Bahamas.