Between the depths of the Tongue of the Ocean and the shores of Andros Island lies the world’s third-largest barrier reef and lagoon system. At over 124 miles long, the Andros Barrier Reef is the third-longest barrier reef in the world. As such, the Andros Barrier Reef is a globally significant geological feature. These 2 national parks were created to protect 8,500 acres of the healthiest parts of this magnificent reef system.

This park has an active warden.

This park has little to no infrastructure or trail systems.

Only accessible by boat

this park is a no-take zone

Coral reefs are considered the rain forests of the sea, supporting high levels of biodiversity and production. Along with mangroves and seagrass beds, they make up the terrific  three. The ecosystems that provide us with critical ecosystem services.

The Andros Barrier Reef is the world’s third largest barrier reef, and the third largest living organism on the planet. It is home to a wide variety of marine life, with over 164 specifies of fish and coral, making it one of the most popular locations in the country for divers and snorkelers. The Northern and Southern Marine Parks are located in two distinct areas of the Andros barrier reef. Both parks encompass an area that includes healthy portions of the main reef system.

The Government of The Bahamas designated the North and South Marine Parks (NSMPs) in 2002 to safeguard portions of this important reef system. Along with the main reef system, these two parks protect smaller patch reefs, lagoons and also isolated cays. 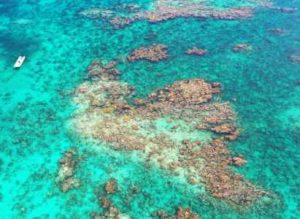 Within the NSMPs is an interesting natural progression of habitats from the shorelineto the tongue of the ocean: Sandy Bottom > Seagrass Beds > Hard bottom > Patch Reefs > Barrier Reef, which then descends down into the deep blue depths of the ocean. This network of habitats, is a part of a larger integrated ecosystem that supports many economically and culturally important marine species in all stages of their life.

>These ecosystems protect Nassau Grouper, Snappers, Spiny Lobster, Queen Conch, and many other important species. With heavy fishing pressures from nearby New Providence and other islands in The Bahamas, these national parks are a major support to marine fisheries in The Bahamas.

The different habitats protected in the NSMP also support significant amounts of other organisms. The reef habitats are comprised of a diverse assemblage of hard corals, gorgians (sea whips and fans), sponges, and various species of algae.

These two parks now serve as a very important part of Andros Island. They support the local economy as key components in the tourism and food industry.

Easily accessible by boat, the adjacent settlements along the east coast of Andros island, are less than 5 minutes away from these parks. They support recreational and subsistence fishing and other parts of the reef support commercial fishing.

Whether it’s scuba diving or snorkeling, the reefs in these national parks provide a close up look at the underwater world of coral reefs. There a variety of popular dive spots throughout the parks including the thrilling wall dive where you can descend along a vertical coral reef, covered by mega corals and teeming with life, or “the flat”, a spot where you witness massive coral structures that tower from the seafloor and   reach out of the water at low tide. We recommend the Small Hope Bay Lodge and Forfar Field Station for diving experiences, they’ll   provide the local know-how and best experience.

Help to create a strong voice for conservation, while enjoying special membership benefits.